Lutherans were the result of the second significant split in the history of the Church since the Resurrection.  The first split was between east and west (Orthodox and Roman Catholic) around the year 1000 (AD).  Lutherans came along 500 years later with a split, not about who has authority, but about the meaning of the Gospel.  The argument was started by Martin Luther in the year 1517.

Lutherans are Christians, and although we are still divided (Eastern Orthodox, western Roman Catholicism and Protestants), we are all Christians. We all proclaim Jesus Christ as the revelation of God to humanity, who was crucified and rose from the dead, and ascended into heaven; as a result, we were given the gift of the Holy Spirit to sustain and guide us.  Lutherans like to end our faith statements with the words, “This is most certainly true.”  It’s just like saying, “Amen.”

Lutherans have a book of faith statements, called The Book of Concord.  It contains a Small Catechism (a brief teaching tool); a Large Catechism (more extensive but still a pretty slim book); The Augsburg Confession (a summary of Lutheran belief and practice); and a couple of other historical documents.

We teach the Small Catechism to children preparing for confirmation. The Large Catechism is for adults; and the whole Book of Concord is studied extensively in seminaries (grad school that prepares pastors for ordination).  That’s a pretty brief summary.  Ask in any Lutheran Church and there will be a Small Catechism for you to borrow, buy, or receive as a gift.

A brief summary of Lutheran beliefs might go something like this:
We believe in God: Father, Son and Holy Spirit.
We believe that the Spirit called the Church into being by enabling the disciples to talk about the risen Lord, who is teacher, worker of miracles and Savior.

We believe that central in the Church’s teaching is the good news that we are counted as justified before God…
Did you ever try to justify yourself when someone accuses you of something?
If you do that to God, you might hear God laugh. We are not able to argue ourselves out of what we have done wrong when we’re talking to God.  SO
… we are counted as justified before God, because God forgives and says, Let’s start over.
We can do this every morning, or at the end of every day.

So we are JUSTIFIED BY GOD’S GRACE THROUGH FAITH.
This doesn’t mean that it doesn’t matter what we do.  It matters to God and to our neighbor (our fellow human beings).  So we borrow from Luther what he borrowed from Augustine. There is a kingdom of heaven where we are counted beloved and righteous by God, AND there is also a kingdom of this world where we are called into active service to the world (regardless of how well we do it).  Lutherans are known in the world for our service to people in need. Our branch called Lutheran World Relief has a very, very high percentage of contributions going directly to those who need it.  You can go to its website to see extraordinary service to the world.  We’re also known as the first to arrive and the last to leave.

Our worship is liturgical. That means it follows a form that has been part of the life of the church almost since the beginning (Pentecost).  We have musical variations and some great hymns in our worship, but the form of it is the tradition of the one, holy, catholic and apostolic church. We use a creed to declare our faith, most often the Apostles’ Creed but sometimes the Nicene Creed.  And each worship service includes Scripture, preaching and Holy Communion. This is our core.

We have two Sacraments:  Baptism and Holy Communion. These are the two we call sacraments because they were commanded by Christ, they use an earthly sign (water, bread, wine) and they contain a promise from God.

Most of our congregations have pastors, who preach and teach and administer the Holy Communion.  Lay people do lots of the rest of things, like sing, pray, read the lessons and join in with everything. Only pastors are allowed to preside at Holy Communion, not by some special hierarchical decision, but because the privilege has been given to us, and we don’t ever want anyone to doubt whether this is a true communion and a true presence of Jesus Christ.  The purpose is Assurance and Confidence in God.

We have a hymnal and it’s not too hard to follow, but if you come to worship with us, someone will surely help you find your way through our traditions and practices.

None of us is perfect, yet all of us belong to God, a loving creator, redeemer and sustainer.  You, your friends, family, EVERYONE, is always welcome, and we hope and pray that the Word of God that you hear in this place will restore, sustain, and strengthen you. 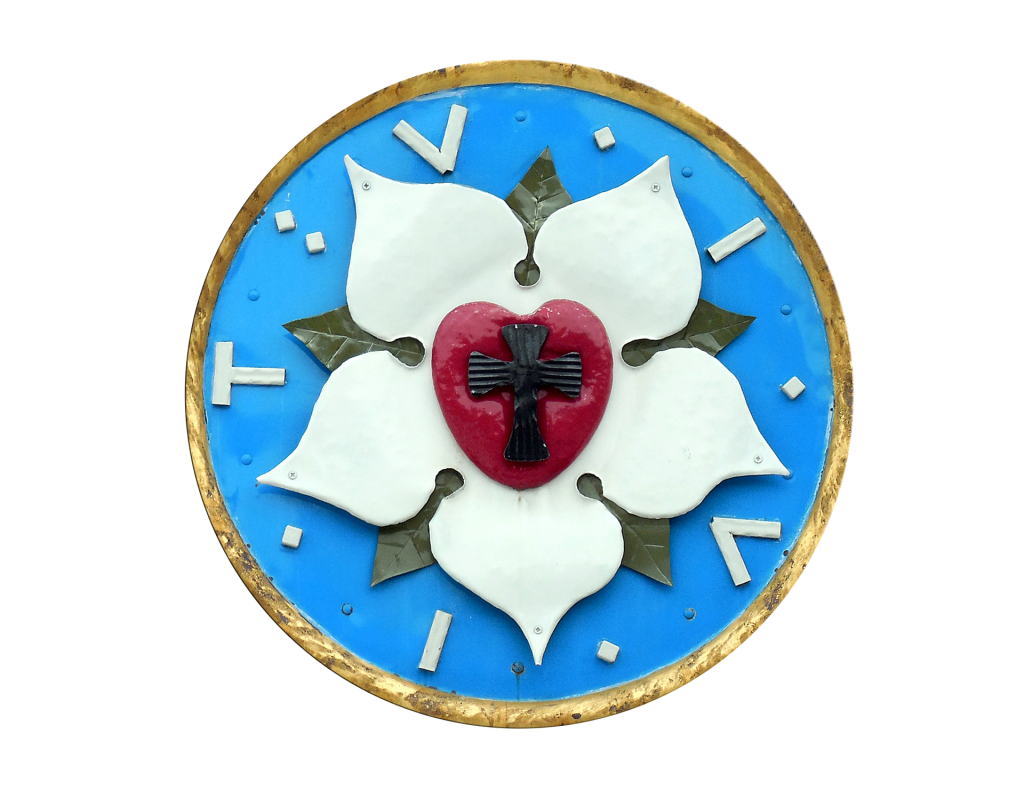 To understand the Lutheran perspective on the Christian faith one must begin with a particular recruit to the monastic and clerical life — Martin Luther: He was a towering personality with an intellect akin to Einstein. He could cut through the heart of intricate, theological and spiritual problems and find a way to communicate the essence of these ideas to the common person. It has been said that he had a fine, earthy way of speech, which allowed him to translate the Bible into the language of the people. Beyond this, he was also a prolific writer, a passionate preacher and a wonderful hymn composer. He had a love for music, scripture and his Lord.

It was never Luther’s intent to start a new church. However, he was in the words of the Christian scholar Jaroslav Pelikan, an “obedient reformer.” He only wanted to reform the old church.

The meaning of grace to a Lutheran: The grace of God is the central theme of Lutheran belief and, among the different Ecumenical groups, is one thing that sets us apart. It is what we proclaim to be all about. Grace is a gift that Lutherans believe is not earned, but received from God. Grace has dawned upon the world with healing for all human kind. Luther would maintain that grace does not abolish nature, but perfects it. It is generous, forgiving, renewing and fulfilling.

In fact, Lutherans can be described in three Latin statements:

Sola Scriptura, scripture alone: The beliefs of our church rest on the Bible as its primary source and the foundation for all that we believe.
Sola Fides, faith alone: Faith becomes extremely important because with it we are linked to a relationship with God built on hope, forgiveness and love.
Sola Gratae, grace alone: Grace becomes key to understanding and interpreting God’s loving actions in Jesus Christ and his message for the whole world.
Who are Lutherans? Today, Lutherans cannot be defined as they once were – as white northern Europeans. On the contrary, the Lutheran church is filled with many nationalities. You can hear the Lutheran liturgy spoken around the world in Spanish, Swahili, Slovakian, Chinese and many other languages. Lutheranism is the fastest growing religion in Africa and Indonesia. We come in all ethnicities and we gather for worship on Sundays around “word and sacrament.” We also love good music. Johann Sebastian Bach is another Lutheran gift to the world.

What we care about. Lutherans can be seen very often as trying to respond to those in need who are hungry, homeless and affected by disaster. Lutheran community services respond to all social issues, from counseling, adoption, domestic violence, illness and elderly support. There are Lutherans around the world building wells, establishing schools and responding with medical aid in countries that are ravaged by famine and poverty. You can find Lutheran chaplains in hospitals, on major campuses and counseling centers. The Evangelical Lutheran Church in America is in partnership with its 26 colleges and universities in settings where matters of learning and faith are engaged. There are Lutheran hospitals, nursing homes, camps and seminaries around the world. The Evangelical Lutheran Church in America has nearly 10,500 congregations across the United States, Puerto Rico and the U.S. Virgin Islands.

Finally, Lutherans come from all walks of life and most of us are just people who gather on Sunday mornings to break bread together, drink wine as we observe the Eucharist and listen to the good news of Jesus Christ. Usually, you’ll find us holding a cup of coffee afterwards and participating in lively conversation about our week’s activities and every other imaginable topic.

Join us for Worship

We are gathering in person to worship, but we also continue to livestream the services on our Public and Private Facebook pages as well as our YouTube channel for those who choose to remain at home.

One quadrant of pews are set aside with masks and social distancing required for those who are not vaccinated and/or hesitant about being in close proximity to others. These worshippers are also invited to come forward first for communion, separately from the rest.

Emails are sent every week with details on worship as well as the other activities at Grace, online and/or in person.

We welcome everyone seeking a spiritual home to our community at Grace Lutheran Church.  As followers of Christ, Lutherans believe in God’s open invitation, gracious hospitality and compassionate love regardless of your religious background, your gender identity, your ethnicity, your age or physical/mental abilities, or your economic situation.  Christ has a place for you here at Grace!

We welcome everyone seeking a spiritual home to our community at Grace Lutheran Church.  As followers of Christ, Lutherans believe in God’s open invitation, gracious hospitality and compassionate love regardless of your religious background, your gender identity, your ethnicity, your age or physical/mental abilities, or your economic situation.  Christ has a place for you here at Grace!

JOIN US IN WORSHIP

We gather together each week physically and virtually. Look to our Services page under the Worship menu for recent service videos. You can also join us live on our Facebook pages and on our YouTube channel. Look for the icons at the top of every page.